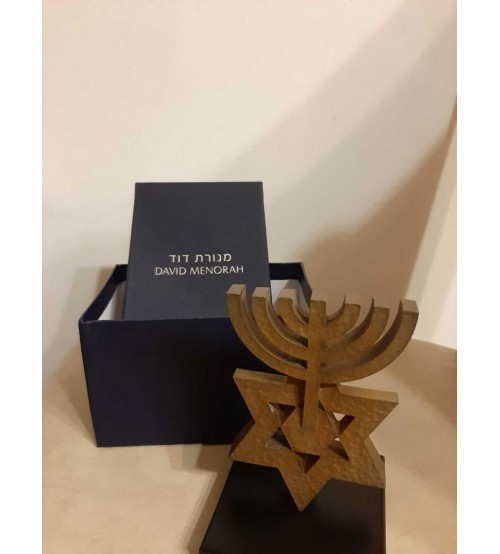 A unique sculpture (only 80 units left) by the artist David Susanna in elegant packaging. One of a kind. There is an option for personal engraving for an additional 45 USD. Made of cast iron + copper plating. Painted aluminum base.

Details: Unique design by the artist David Susanna that combines the Star of David and the The seven-branched lamp, the oldest Jewish symbol on mosaic floors in ancient synagogues in Israel and on coins.

This symbol is based on the golden lamp that was in the temple. Since the destruction of the Second Temple in 70 AD, the menorah carried the memory of the destruction and its importance is illustrated in the reliefs of the Arch of Titus as a symbol of the victory of the Romans. Over the generations, the use of the shape of the lamp has become as a sign of national identity. After the establishment of the state, the menorah was established as the symbol of the state.

Note: HTML is not translated!